Seal Support Systems manage the fluid between and around the seal faces, whether it is cleaning, cooling, or heating the seal media or delivering a different fluid to the mechanical seal. 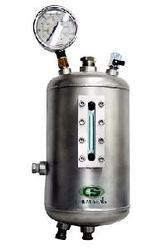 In some cases, for mechanical seals to function correctly the conditions in which they operate must be altered. This depends on the seal type, the duty conditions including environmental protections, and the type of equipment into which the seals are fitted. A simple change to a single seal's operating conditions in the dead ended arrangement can be made, for instant, by adding a recirculation line from the pump discharge to the seal chamber. As operational demands increase, so to must the capabilities of the supply units to support the mechanical seals.

The following section contains the necessary information for the correct selection of the supply systems and auxiliary equipment to ensure reliable operation of your mechanical seals.

For single seal it is generally advisable to install a circulation pipe from a discharge nozzle of the pump to seal chamber. A pipe size G 1/4 is normally sufficient. There should be a closed fitting neck bush between the pump casing and the seal chamber.

For single seal it is generally advisable to install a circulation pipe from a discharge nozzle of the pump to seal chamber. A pipe size G 1/4 is normally sufficient. There should be a closed fitting neck bush between the pump casing and the seal chamber.

Quench is the term commonly used in the sealing engineering for an arrangement that applies a pressure less an external medium (fluid vapour, gas) to a mechanical seal's faces on the atmospheric side. A quench is used on the one hand when a single mechanical seal does not function at all or within a certain limits without auxiliary measures or when a double mechanical seal is unnecessary. When an integral stationary seat stop is fitted, the quench pressure should not exceed 1 bar.

To guarantee the correct working of double mechanical seals, the buffer inter space between the product side and the atmosphere side of the mechanical Before starting up double mechanical seal it is vital, therefore buffer fluid pressure should lie 10% or at least 1.5 to 2 bar above controlled to ensure that the temperature of the buffer medium at the outlet lies below approximately 60°C and that it does not exceeds boiling point under any circumstances. The maximum acceptable inlet/outlet temperature differential is 15k.The buffer fluid outlets lies at the highest point of the stuffing.

In view of the basic conditions of operation, a buffer system must perform the following functions:

Open Circuit: A circuit in which both the circulation and the pressurization take place through a single buffer fluid system. After each circuit, the buffer fluid is relieved and collected in pressure less tank.

Closed Circuit : In this type of circuit all the components are kept under the same pressure is applied by means of nitrogen (TS system) or the process medium pressure or via refill when drawing up the design.