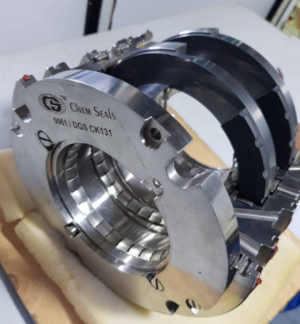 Dry gas seals consist of a mating (rotating) ring and a primary (stationary) ring that is non-contacting, dry-running mechanical face seals. When the spinning ring is in operation, the lifting geometry provides a fluid-dynamic lifting force, which causes the stationary ring to separate and create a gap between the two rings. Dry gas seals are mechanical seals that employ other substances and functions to keep a process clean. Oil exploration, extraction, and refining, petrochemical industries, gas transmission, and chemical processing are all common applications for these seals.

On one side of the seal face, machined-in lift profiles drive gas inward toward an extraordinarily flat part of the face. The gas moving over the face creates a pressure that keeps a small gap between the two faces, improving fluid film stiffness and giving the best possible protection against face contact. By altering gap and pressure to maintain stability, the seal's film stiffness accommodates variable operations.

How do Dry Gas Seals Function? 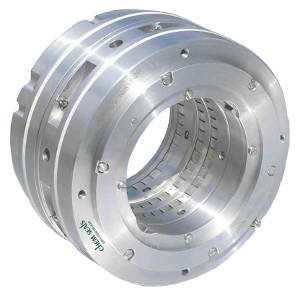 DGSs work by forming and maintaining an extremely thin gas layer (less than 5 μ m) between two disk-like surfaces, one stationary and the other revolving. The stationary face is spring-loaded, and keeping this gas film in place under all operating situations is critical for a good seal. Because the gas coating is so thin, the most effective way to prove its existence is to conduct a thorough running test. As a result, all DGSs should be dynamically tested both during production and after seal repair (often called seal refurbishment). The design of gas conditioning and DGS support and monitoring systems can be extremely complicated depending on the nature of the gas and the criticality of the service. DGSs and their progenitor models share a lot of functional commonalities. Many types of face, bushing, and floating ring seals are included in the precursor or predecessor oil-lubricated ("wet") seals. However, there are certain component differences between wet seals and DGSs. For example, in a DGS, the seal face of the revolving mating ring can be separated into a grooved region on one high-pressure side and a dam area on the other. Laser-etched, spark-eroded, or chemically machined grooves are common. A common depth is 8 mm, which is clearly attained with extremely fine machining. Bidirectional grooves are T-shaped and/or V-shaped grooves. L-shaped (unidirectional) grooves have also been created, and each arrangement has its own set of benefits and drawbacks. A stationary sliding ring is pressed axially against the mating ring by both spring forces and sealing pressure.

Between the mating ring and the sliding ring lies the sealing gap. The grooves' pumping action and the sealing dam's throttling effect create the required gas film. The seal's trouble-free operation depends on a properly designed groove shape.

Refer to Our API 682 Section on our website for more details.